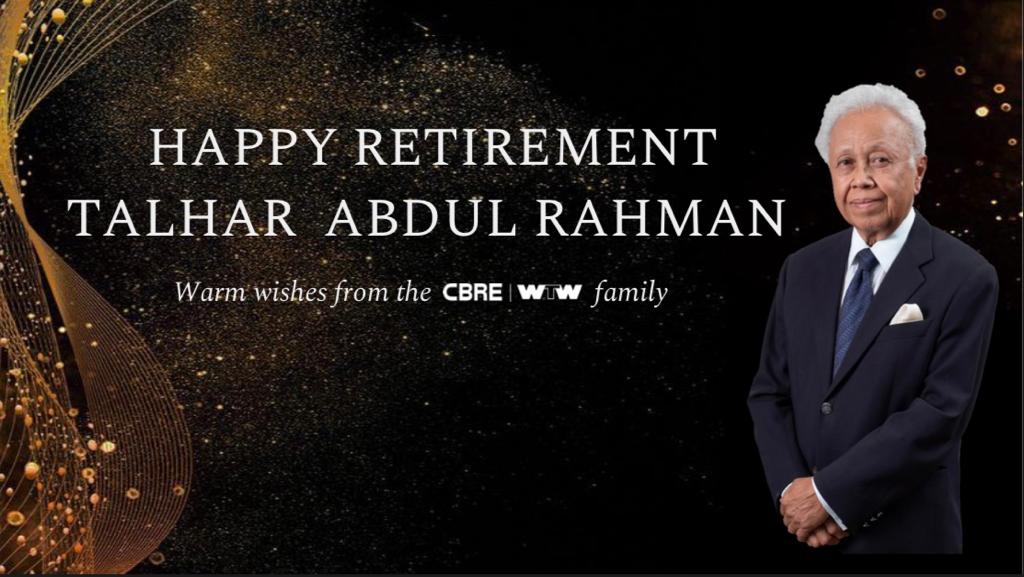 CBRE | WTW, formed in 2016 can trace its genesis way back to 1960 when the late Colin Williams established C H Williams & Co, Chartered Surveyors Valuers and Estate Agents in Kuala Lumpur. When in 1974 the Company merged with Talhar & Co, a Chartered Surveyors and Valuers firm set up by Mohd Talhar in Johor Bahru and having on board Wong Choon Kee (Dato’) from C H Williams & Co in the exercise, WTW was founded with Colin Williams as Chairman. Upon his retirement in 1981 Talhar took on the Chairmanship of WTW and continued in that capacity with CBRE | WTW.

Talhar began his career in 1964 in the Johor Civil Service, upon obtaining his Professional Membership of the Royal Institution of Chartered Surveyors in 1963 following full time study at the College of Estate Management, University of London and an internship as Trainee Surveyor at the Welwyn Garden City and Hatfield Development Corporations in the UK. He continued to serve in the Government service as Regional Valuation Officer in the Ministry of Finance (JPPH) from 1967 up to 1972 before setting up Talhar & Co.  During his career span of nearly half a century with WTW, Talhar has accomplished an impressive endeavour filled with achievements in placing the company among the forefront of property professional firms serving the industry.

Talhar’s devotion to the property surveying profession throughout his career is evidenced in his active involvement in the professional bodies and related organisations nationally and internationally, participating and presenting papers at congresses, conferences and seminars. He was among the first members of the BOVEAP, held offices in RISM and was one of the founders of PEPS serving as its first President. He served for several years as Malaysia’s representative and as a Management Board Member of the International Valuation Standards Committee (IVSC), and as a Council Member of AVA.

He reflected, “What I achieved was in getting the team, past and present, to work together, with their individual ability and dedication, to deliver quality service to give our clients a leading edge.”

It has been a privilege for CBRE | WTW to have a leader of the highest caliber like Talhar as the company’s Chairman for 40 years and the longest serving Director for 47 years. His legacy which the company and the industry have benefitted from will continue to be remembered and honoured.  Talhar’s retirement is a celebration of his decorated career. CBRE | WTW would like to express the utmost gratitude to Talhar for his valued contribution and the company wishes him a wonderful retirement.

A guide, a leader, a manager, a confidante, a role model, mentor, and friend: You are everything a boss ought to be. We will miss you.