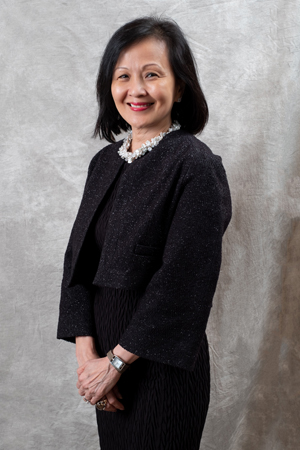 Pauline Goh has been an important key to CBRE’s success, having been directly involved in major investment property transactions entrusted to the company, as well as managing the business and its people.

In her role as Chairman SEA, Pauline is responsible for CBRE’s business activities in Singapore and the rest of South East Asia including Malaysia, Indonesia, Thailand, Cambodia, Vietnam, Philippines with Indonesia and Malaysia via alliances, Philippines and Cambodia via affiliations. Singapore, Thailand and Vietnam are wholly owned offices. Under her leadership, CBRE Vietnam was acquired as a wholly-owned office in 2012 and Thailand in 2014. She is also a member of the company’s Asia Pacific Strategic Group and Asia Management Board.

As Managing Director since 2005 and subsequently as Chairman in 2010, Pauline has steadily built up the CBRE brand to be the leading property services firm in Singapore as well as in South East Asia. Singapore’s Commercial leasing team is recognized as one of the best in Asia, achieving the highest turnover of successful leasing deals for over the past decades, representing most of the leading property developers in iconic Grade A office buildings in the Central Business District and the new Marina Bay Downtown including Marina Bay Financial Centre, Metropolis, One Raffles Quay, One Raffles Link, Millenia and Centennial Towers. Under her stewardship, the Investment Properties team has earned a solid reputation, having inked many record-breaking investment deals including the largest independent private property transactions to-date, the sale of Temasek Tower by Asia’s largest property developer CapitaLand to Macquarie Global Property Advisors (MGPA) for S$1.039 billion, and the sale of TripleOne Somerset by Singapore Power and Public Utilities Board to a fund managed by Pacific Star for $1.01b. Pauline is also directly responsible for the success of the CBRE Residential department over the years. The team has launched an unrivalled number of projects since 1993 when she took over the team, securing sole agency instructions for some of the island’s most prestigious and prominent developments.

Under her stewardship, the company has earned a number of awards. CBRE Singapore was voted the Best Property Consultancy in the Southeast Asia Awards in 2012. Leading financial publication Euromoney named CBRE Singapore the top firm in Singapore in 2008-2015. It has remained on the top 3 list since 2012 and 2013. For her outstanding leadership and dedication to the company, Pauline was awarded a Special Achievement Award at the CBRE’s Asia Circle of Excellence for two consecutive years in 2007 and 2008. Pauline was appointed Chief Executive Officer of Singapore and South East Asia on 1 July 2010.

Our Spring Sale Has Started

You can see how this popup was set up in our step-by-step guide: https://wppopupmaker.com/guides/auto-opening-announcement-popups/